In 1988 my late karate teacher Brian Docherty encouraged me to set up my own karate club and asked me to take on the name of Ronin as the clubs name , well coming from Glasgow and at that time had never visited Japan or new anything about the Japanese culture or even  a great deal about the history of karate I thought this was a cool name .Brian at the time went on to explain the history of the name Ronin ( a samuri with no master ) was his explanation and as he was my teacher his explanation was readily acceptable.

It was much later that a film called 47 Ronin in black and white and in Japanese came on the scene which gave me a bigger insight into the meaning of Ronin .

On visiting Japan  in July 2014 and purely on a walk about in the suburbs of Tokyo low and behold round the corner in a quit suburb the burial site  shrine and temple to the 47 Ronin called Sengaku-ji Temple. Since then when I am in Tokyo I always find myself sitting in this very peaceful Temple with the scent of antiquity hanging over the Sengaku-ji Temple  as well as the odour of the incense burning before the graves  in the middle of this very busy city were all the bodies of the 47 Ronin with their master Lord Asano from Edo ( now called Tokyo ) and the chief retainer Oishi from the Asano Clan are buried  and Lady Asano tomb is also there , facing the markers of the loyal followers graves . The Shrine also has on display their armour worn at the time. 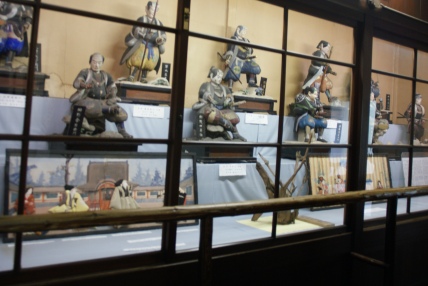 Today in Japan their acts are the source for Japans most celebrated story of bravery, cunning,and loyalty .It has been told and retold in plays , in books ,in print ,in movies and on television  ever since the news first swept through feudal Japan

The 47 Ronin Story is the unforgettable saga of a band of samuri who defied the Emperors laws and faced certain destruction to avenge the disgrace and death of their master  Lord Asano in the year of 1701. The men from Ako had defiantly disregarded the Shoguns law but by dying for their lord showed their devotion to what they considered the higher morality .

The Shogun was troubled that he would have to execute such brave men for living up to the feudal code as they saw it but was bound by the law and nothing anyone could do about it except for making an alteration in the sentence . This was within his authority and would better serve his own sense of justice .Although lordless men and hence not legally entitled to such treatment they were to be allowed to disembowel themselves in the noble ceremony of seppuku .

Now that the IKIF 2017 Tournament in China is over we turn our attention to the next one which is to be held in Denmark in 2021 . Although it is 4 years away we have to plan our training to allow new children and adults to achieve the  skills for that tournament . I will be putting in place a training schedule from January 2018 to cover the next 3 years , we will be looking for students interested in training for this tournament to let me know .

As Denmark is very close to Scotland the cost will be a lot cheaper and we will only need to be there for the week-end reducing the overhaul cost , please remember that children under 18 years of age will require a parent to accompany them for this trip .
Names will be taken now so please encourage your child to participate .
Charles Hunter
Loading Comments...
Comment
×
%d bloggers like this: